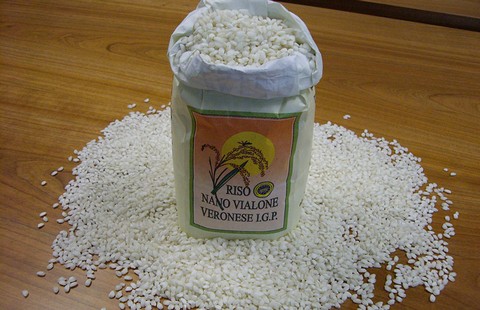 Rice was introduced to Venice from the East, and soon became the emblem of wealth, abundance and fertility, symbolism still reflected today in the tradition of throwing rice over the bride and groom at the end of a wedding ceremony. Rice dishes have long signified hope on the tables of the poor in Veneto - rice and fegatelli (pork livers) has been served at rural weddings for centuries - as well as on the tables of the upper classes.

The typical dish of the Dogi served in celebration of Saint Mark, Patron Saint of the Republic, was risi e bisi (rice and peas), a recipe that still remains very famous. Cultivation began in the sixteenth century, buoyed by considerable tax incentives applied by the Serenissima Republic of Venice. It was first grown on the Verona plain at the beginning of the seventeenth century, and has had a considerable influence on the landscape and local traditions. Major irrigation systems were built so that long channels could carry pure water drawn from springs to the fields, a precious commodity for the growers. Along its path, water was also used to generate motion required by rice basins, mills and other small works.

Rice growing in the Verona area has always focussed on top quality varieties and growing practices have been refined over the years, with traditional methods being improved by modernisation. The Vialone Nano variety was a welcome arrival to the area and its outstanding quality prompted the Protection Consortium to apply for the European indication. Rice is a special product for the people of the Veneto Region, as it was introduced by the Eastern communities who had settled in Venice and enjoyed flourishing trades there. It soon became a traditional food, to the extent that regional cooking methods are unique. Here, rice is to be served "all'onda" (like a wave), cooked in just a little liquid, so the grain takes on the flavour of the other ingredients but remains "al dente".

It has to remain soft - like a wave - after it has been "bound" with butter and in some cases a sprinkle of grated Grana cheese. The secret to these recipes lies in the traditional, gentle but astute process that gives the grain of the nano vialone veronese its hint of a darker tone, preserving its distinctive flavour and making it so hard to overcook. The coarse rice is dried, grains are whitened by a mechanical process and finally the best rice is selected by removing impurities and even the slightest defects. The result is a white grain with no stripes and with a discernible central "pearl".

The designated region of cultivation is very extensive, and features architectural and cultural places of interest that lie along the route of the Strada del prodotto tipico (Typical-product Road). There are many fifteenth century Venetian style homes still found on the plain of Verona. The homes of landowners, Patron or Paron as they are known locally, were once located at the heart of large farms, but were later transformed into luxury country residences for the city nobility, who adorned them with frescos, statues and gardens. In the sixteenth and seventeenth centuries, humanistic gardens took on the semblance of vegetable collections with plants being cultivated for their pharmacological properties. In the nineteenth century, many of these were made into flowing English-style gardens. Villas with such gardens can be seen in Isola della Scala (Villa Giuliari), in Cerea (Villa Dionisi) and several other towns in the plain of Verona.

The landscape is also dotted with several churches that were rebuilt after the earthquake of 1117, with a Romanic style, reusing Roman or Longobardi materials. An example is the Chiesa della Bastia in Isola della Scala.
Also deserving of special mention is the important fine furniture district located in the area, where artisan workshops reproduce classical furniture or restore original pieces.