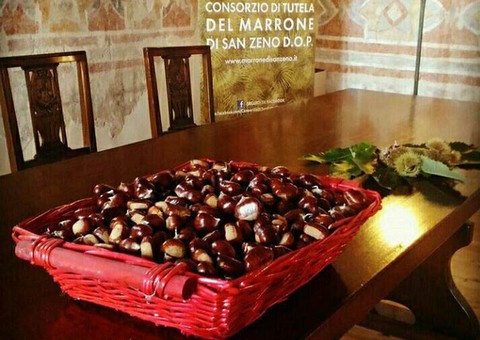 Chestnuts have been a staple food in mountainous regions for many centuries, and their flour is used to make bread, pasta, cakes and polenta.
The fresh nuts, typically roasted in a special perforated pan and accompanied by new wine, were the traditional fare for the harvest festival dedicated to Saint Martin. In many towns throughout the Veneto Region, this fare was often combined with the first collection of alms of the year and All Souls' Day. Special biscuits made from chestnut flour, similar to small "castagnacci" (chestnut cakes), marked the occasion.

Written documents mentioning cultivation of the San Zeno chestnut date back to the thirteenth, fourteenth, seventeenth and nineteenth centuries. The documents identify the typical production areas, some through cadastral maps, and provide information on the best plantations, harvesting methods and chestnuts sold at weekly markets. This tradition has been revived since the 1920s, after the First World War, and a local chestnut festival, the Sagra del Marrone, has been held regularly in November (now mid-October) in San Zeno di Montagna.

The San Zeno chestnut P.D.O. growing area is found on the slopes of Mount Baldo overlooking Verona, between the Adige river and Lake Garda, at an altitude ranging from 250 to 900 m above sea level. The lake effect keeps the climate mild. The chestnut woods are home to some ver large trees, some striking examples of which are centuries old. They grow in acid soils in a humid and temperate climate, perfect conditions for the nut to develop its distinctive features.

The Marrone di San Zeno variety differs from other chestnuts being oval-shaped and bigger than other types grown elsewhere; the pulp is richer, sweeter and more palatable, it is light with darker streaks, and the husk is thin and easy to remove.

The Protection Consortium has focussed in particular on protecting traditional farming techniques: all aspects of cultivation such as pruning, harvesting, risara (storing the nuts in their husks), novena (immersing them in water for nine days), and techniques to clean and select the chestnuts are handed down from father to son. The Consortium also sells the nuts directly, providing a link between producer and consumer, especially during the San Zeno day fair.

This municipality - where the cultivation of chestnuts has a certain economic importance - lies on the south-western slopes of Mount Baldo, in a district rich in natural beauty and striking vistas. Visitors can experience the malghe (alpine shepherds' cottages) and plan excursions in the idyllic mountains, pausing to admire the views of Lake Gard.