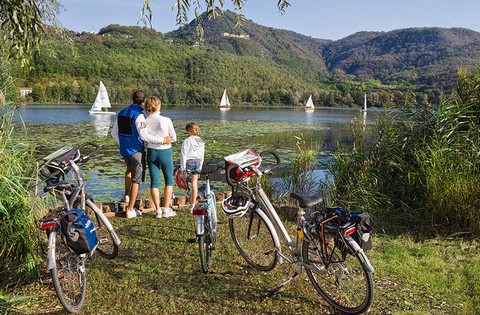 With its splendid scenery and cycling routes suitable for lovers of cycling, the Veneto region is the ideal destination for your holiday. Places rich in history, culture and traditions can be found from the mountains to the hills and up to the coastal areas.

The area of Lake Garda with routes of varying difficulty and paths that wind along scenic roads, immersed in the thickness of an unexpected Mediterranean flora has always been a destination for bicycle lovers. The cultural visits at Vicenza can be seen while cycling, such as Villa Capra Valmarana called "La Rotonda", with its rustic charm of the countryside around Vicenza. The Berici Hills should also be discovered with its small treasures like Marostica, the town of chess. You can also start for Padua from Vicenza by following the thrilling Berico-Eugenio path and then you could continue in the discovery of smaller cities of art or the rich heritage of villas of the Brenta Riviera.

The route starting from Verona is also very interesting. It passes through Rovigo, goes to Rosolina Mare and then enters the uncontaminated nature of the Regional Park of the Po Delta. Verona is the starting point for another path that crosses Padua and the Veneto plain and ends up in Venice. The natural park of the Sile in the province of Treviso allows for evocative bicycle rides immersed in the green vegetation and the silent waters of the river. Another fascinating bike path crosses the natural and historic Asolo Hills starting from Cornuda up to Bassano del Grappa.

Padua offers cyclists a guide entitled "Padua and Province by bike: Cycling paths, excursions and routes", distributed free of charge at the Information Offices and Tourist Assistance Offices of Padua. This innovative product comes in a handy format that is specially designed for the ease of reference and use during the trip, with detailed maps that can be integrated with already developed GPS routes (these can be downloaded for free). The sixty pages of this book explain six bicycle excursions and six cycling routes with their length, degree of difficulty and the possibility of combining other forms of public transport.