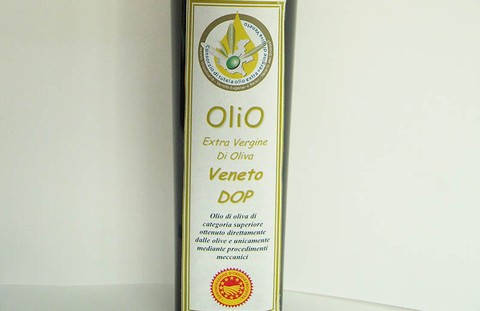 Olive growing is said to have started in the Veneto Region in Roman settlements. Evidence of olive groves in the Verona area dates to the Early Middle Ages. The good exposure and the protection against cold currents offered by the slopes have spurred the spread of olive groves in the Valpolicella area and in the nearby valleys of Verona, later on the hills of Vicenza as far as Pove del Grappa and on the Asolo hills, and finally on the Euganean and Berici Hills.

The primary feature of the consortium's produce is the traditional cold pressing of select, healthy fruit, hand picked using a rake or a pincer to pull them directly from the branches. Pressing takes place just a few hours after picking to avoid spoiling. Pressing is done by traditional methods (presses or mills) to preserve the organoleptic qualities of the picked olives. The quality features of this oil stem from the typical variety of the olives and the attention paid to each and every detail during processing. Nature bestows a propitious climate and ideal land contours, but it is man's toil that makes this oil special.

All together, these factors give the product distinctive organoleptic features that are fully appreciated whether the oil is served cold, uncooked, or hot, since this type of oil resists well at a high temperature and maintains its flavours splendidly during all types of cooking. The maximum acidity of the oil expressed as the quantity of oleic acid does not exceed 0.5-0.6 grams per 100 grams of oil.

The Veneto "Valpolicella" extra virgin olive oil P.D.O. - from the Grignano or Favarol varieties - is yellow with subtle shades of green, a light fruity smell and taste, with a faint sensation of a bitter and musky aftertaste.

The Veneto "Euganei-Berici" extra virgin olive oil P.D.O. -from the Leccino and Rasara varieties - is green-gold with a marked intensity, its fruity smell varies in intensity and its fruity taste has a hint of bitter nuances.

The Veneto "del Grappa" extra virgin olive oil P.D.O. - from the Frantoio and Leccino varieties - is green-gold with modest yellow variations, its fruity nose varies in intensity, and the taste is also fruity with bitter nuances.

Each of these three oil districts boasts suggestive and unique landscapes.

The olive oil district of Verona, which goes under the name of Valpolicella, extends along the right bank of the Adige river and encompasses the wine-growing regions of Recioto and Amarone, starting in the traditional municipalities continuing on to the Bianco di Soave wine-growing area. In this territory, villas and castles are dotted among the vineyards, while olive groves grow mainly in areas where the calcareous soil is more rugged.

The olive oil district of the Euganean and Berici hills enjoys a different landscape: the horizon of the Veneto plain is broken up by two neighbouring groups of hills, which - in spite of being geologically different - are equally good for growing olives and vines. The Berici Hills in the southern area of Vicenza are calcareous. Production peaks in Nanto on the east side, and in the wine area of Gambellara on the northern side. The Euganean Hills are volcanic in origin and are protected by the Regional Park, where olive growing is concentrated around the town of Arquà Petrarca, an ancient oil producing area with excellent wine and food resources.