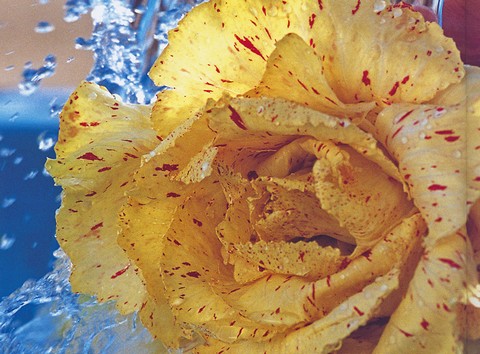 The history and tradition of the radicchio variegato di Castelfranco is closely entwined with the late radicchio rosso di Treviso. Its origins almost certainly point to the latter being crossed with endive in Castelfranco Veneto. Its characteristic broad, thick, creamy-white leaf can be ascribed to endive, while its intensely colourful, brighter variegation and suitable for the forcing blanching process would appear to derive from the late red typology.

The result is delicious to the palate and pleasing to the eye, so much so it became known as the "rose of Castelfranco" or "edible flower". This affectionate description is especially fitting for the mature plant after the finishing process. The head typically has white-creamy variegated leaves distributed evenly throughout the leaf, in different tones from a pale violet to violet-red and bright red, with jagged edges and slightly wavy blade. The leaf has a dense consistency in the mouth. Its flavour is delicate, ranging from sweet to pleasantly bitter. Locally, it is traditionally eaten raw as a simple salad like all the radicchio di Treviso typologies. It can also be used in many other ways, for example as a base for a mixed salad or with a special dressing, or as an ingredient for risotto, soup, cooked or even fried.

The ground is cool, deep, well drained and quite sparse of nutritional elements in its designated area of production, which includes the provinces of Treviso, Padua and Venice. Heads are harvested at the beginning of October, but onl the production method is able to enhance the organoleptic qualities and appearance of the product, which at the end of a long process is presented in homogeneous, compact heads about 15 centimes in diameter that stand on short stalks.

The natural and cultural wealth of the area is very visible along the Strada del prodotto tipico (Typical-product Road). The Sile river flows by beautiful landscapes, where the indigenous flora and fauna of the Regional Park welcome walkers or cyclists, inviting them to enjoy the serene paths that run alongside the embankments. There are many examples of Veneto architecture here, dating from the Renaissance onwards. But it is the historical centres of the two cities, Treviso and Castelfranco Veneto, which attract the greatest number of tourists with their rich and diverse cultural offer.