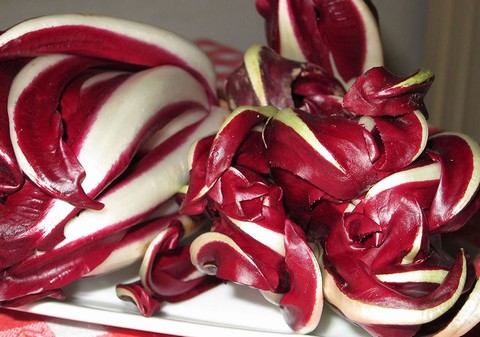 This is a unique and incomparable product, typical of the rural culture of the Treviso area.
An 1862 almanac, L'Agricolo, claimed that the month of December was for ... «earthing up cabbage and broccoli, and for whitening red and white radicchio covering the ground with dead leaves». This seems to be the first official report of red radicchio being covered to turn it white.

This technique, suggested by nature itself and used for centuries in Veneto, was soon perfected.

The late typology of radicchio di Treviso is locally known as radìcio spadón or sword-shaped. This regal characteristic is no less important than its bright purple-violet colour, and can claim equal responsibility for its global renown. It has a fresh and delicate flavour, its fragrant and noble, fragile, slender leaves stubbornly enclose the heart in a defensive grasp, the red flower does not give up its leaves easily. It is a delicacy to savour with all the senses, a prize for the cook and the person who eats it alike. Its leaves crunch in your hands and are soft to the touch.

It never fails to astonish with its subtle undertones of spring water and bitter taste: this is late radicchio di Treviso! It is preferably eaten raw so its qualities can be enjoyed to the full, perhaps accompanied by other delicate flavours to compliment it.

The production area encompasses a large territory spanning the provinces of Treviso, Padua and Venice, an area characterised by slow-moving rivers and tributaries, making the land fertile and productive. The two typologies of radicchio, early and late, are grown on deep, well-drained soil.

The precoce or "early" typology can be harvested from the first of September and, thanks to a special binding, it has a long, firmly-closed voluminous head with shining red leaves broken up by thin white veins. The tardivo or "late" typology is harvested from the first of November and then subjected to a forcing process that gives it a characteristic, flavoursome taste. The forcing-blanching process is essential for underscoring the organoleptic value of the late typology.

The heads are collected in special covered vats that let little light in. The roots are set in spring water: gentle and constant, the flow of warm water washes and refreshes all the roots, helping the plant once again grow. Using only the reserves of the large root accumulated during the summer as its food source, it once again grows new, tender and crunchy leaves without light, therefore without any source of chlorophyll pigment, highlighting its intense red colour, and losing its fibrous consistency, becoming crunchy and pleasantly bitter.

The "winter flower" has bloomed, hidden and protected by summer leaves that are sacrificed in a charitable attempt to keep the cold at bay. This is the moment when the expert hand of man comes into it: the heads are left for a few days to dry at a mild temperature on sand or straw, and then delicately freed from their outer leaves and peeled, leaf after leaf, until the "heart" appears in all its splendour; the root is beautifully carved, with a special, very sharp and slightly curved knife, before being trimmed according to the size of the "flower".