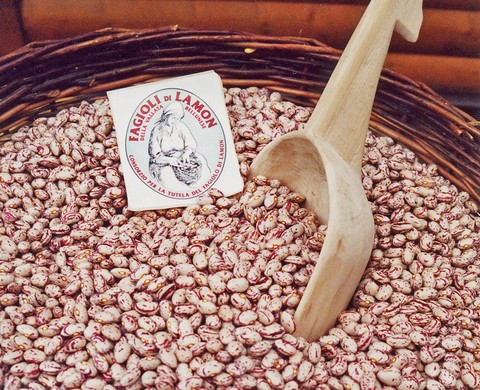 This legume was the staple food for the less affluent classes as an alternative to meat for many centuries. It has been rediscovered in recent decades as an ingredient in traditional, characteristic local dishes.

It was brought to Veneto's mountain areas by the humanist Giovan Pietro dalle Fosse, known as Pierio Valeriano, who went to Rome to work at the Papal Court, appointed as tutor of Pope Clemente VII's nephews. It was the Pope himself who in May 1532 gave him some bean seeds and assigned him the task of spreading them in his native land. So, Valeriano, who had a great appreciation for all things rural as well as literary, cultivated the plants on his property in Castion, near Belluno, to find that the soil was particularly favourable for such a crop.

In describing the beans in his Hieroglyphica (book L), he said «this legume, long unfamiliar in our area, is now abundan in many kitchen gardens; the plentiful fruit hides beans resembling animal kidneys. Some are the colour of a lotus, others are red or black and others still black and white». He was also known to have said «this legume is not as bad as some infer. On the contrary, it is tasty and palatable as long as it is removed from the pod».

The plant was soon growing throughout the valley and in the area of Feltre. It was not long before the Lamon and Sovramonte areas were discovered to be an ideal environment for the production of a top-quality product, to such extent that a variety Borlotta was named after the town of Lamon. On this plateau, bean growing rapidly replaced the existing production of peas, which were equally famous for their extremely thin skin, boosted by the soil and climate conditions.

Such conditions prompted a spontaneous selection of the bean, resulting in four basic ecotypes: the egg-shaped Spagnol, the somewhat smaller Spagnolet, the largest-sized Calonega, and the Canalino, which is particularly tasty, but not commonly used because of its thicker skin. Cultivation became popular in these valleys because the bean could be grown alongside other crops, enabling a greater volume of produce on the same plot of land. Beans were considered a veritable gift of providence and inevitably became part of the local gastronomy together with smoked lamb, since sheep farming was another key activity on the plateau. In 1996, the European Community granted Lamon beans the P.G.I. indication, confirming the vocation of the area and the characteristic nature of the product.

The P.G.I. indication requires, in particular, that seeds be produced in the area between the Lamon plateau and Sovramonte, while they can be planted and cultivated in a broader region area, including the Feltrina, Bellunese and Valbelluna Mountain Communities.
The territory offers extraordinary natural features as it is between the Eastern pre-alpine mountains and the Dolomite chain, encompassing also a Natural Park. The valley's main towns are Feltre and Belluno. Both enjoy pre-Roman origins and have a wealth of monuments and extraordinary architecture, although their distance from the plains has prevented them from becoming very famous.

The valley is brimming with rural villas, churches and well-preserved villages, the hills and plateaus are full of charm. Lamon especially offers a palaeontological naturalistic route dubbed "Sulle orme dell'orso delle caverne" (In the footsteps of the cave bear), which weaves through the enchanted valley carved by the Senaiga stream.
Equally fascinating remains of ancient populations can be found in the territory, in the form of a late Roman necropolis and the bridge near San Donato, which is part of the Via Claudia Augusta.