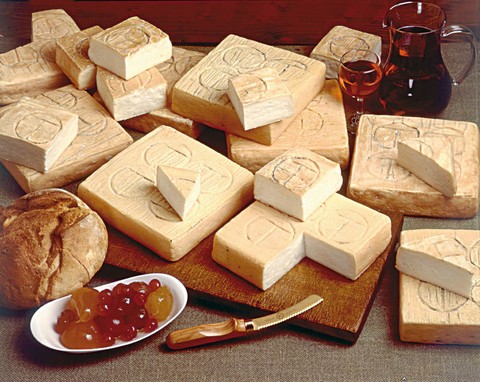 The origins of this cheese go back a long way, as demonstrated by some documents from the thirteenth century which make reference to it being traded and bartered for other goods.

Its point of origin is Val Taleggio, a valley in the province of Bergamo, from which it takes its name. The inhabitants of this valley needed a way to preserve surplus milk, so they began to make a cheese that they could also use - after its ripening period in valley caves or casere - to barter or sell. Rising demand for Taleggio encouraged its expansion, and several dairies began to spring up on the Po valley, mainly small and medium cheese makers. The official guidelines establish the current area of production as being the province of Treviso in Veneto, Bergamo, Brescia, Como, Cremona, Milan and Pavia in Lombardy, and Novara in Piedmont.

Taleggio P.D.O. is a soft, high fat, raw cheese made only with whole cow's milk. It is dry-salted or brined, and needs at least 35 days to age. Its paste is uniformly compact, and its colour ranges from white to straw yellow. It has centripetal maturation, meaning aging begins on the outside and works inwards, therefore the cheese just beneath the rind is aged the most. The rind is thin, soft and natural rose, reflecting that ripening is aided simply by spongeing at intervals with water and salt. Its form is parallelepiped and quadrangular, the sides are straight with flat surfaces, and on average it weighs between 1.7 and 2.2 kg. The taste is sweet, with light acidulous vein, slightly aromatic, sometimes with truffle aftertaste.

Moulds are one of the essential environmental qualities of the product, playing an important role in its maturation, aroma and the colour of its rind.
Cheese-makers have also managed to incorporate technological innovations, especially in more recent years, though the traditional technique remains essentially unchanged. It is the prized balance of environment, tradition and technology that has spread out from the original valley to the entire cheese-making area that makes Taleggio such a high quality cheese.