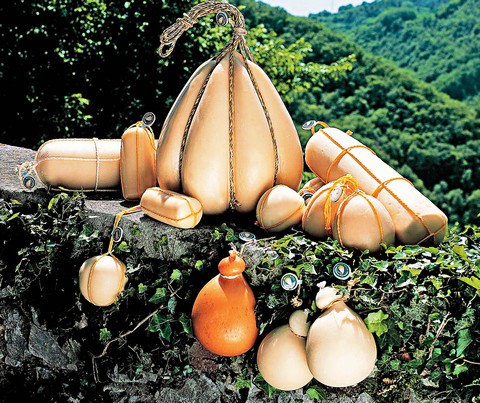 This cheese could be considered the meeting point between southern dairy culture and the Po valley environment. In the south of Italy, stretched-curd cheeses like mozzarella, caciocavallo and provola have been made for time immemorial. They are called stretched-curd cheeses because of the special technique used for warming the milk to produce a curd, which is then literally "stretched". The process, once done exclusively by hand, gives the cheese its typical thread-like consistency.

The climate and geography of the south of Italy made for a short life for milk, quick to deteriorate and a challenge to transport. Accordingly, stretched-curd cheeses were kept small and, after the ripening period, were almost exclusively used for grating. Provolone Valpadana was first produced by some dairy farmers in the second half of the nineteenth century after Italy was united, most of whom had emigrated from Lucania and Campania in the south to settle in the main cattle farming areas of the Po valley in the north. They not only found that cow's milk was widely available in Lombardy and Emilia for their stretched-curd technique, but that the climate was also propitious. Such conditions meant the farmers could make bigger cheeses, with a completely different quality.

Provolone Valpadana P.D.O. is a semi-hard stretched cheese made from whole cow's milk. It comes in different forms bearing a colourful array of names: salami and salamini, pancette and pancettine, mandarini and mandaroni. Its external surface is scored by shallow lines from the string used to hang the cheese to ripen. Its texture is compact and light straw yellow, and it may have faint, occasional holes. Light peeling is tolerated. Its rind is smooth and thin, glossy, golden yellow or brown, and it can weigh more than 100 kg. It is delicate until three months of aging, but becomes spicy with longer periods of aging. The cheese is produced in the area of the Po valley, specifically in those Veneto, Lombardy and Emilia Romagna provinces overlooking the Po river basin, in addition to some municipalities in the province of Trento.

The territory is vast and characterised by a diversity of landscapes, especially the upper and lower plain areas, two strips that run almost parallel to the arch of the Alps. A line of natural springs feeds a multitude of small creeks transecting the area. The Po river and its tributaries have marked an important thoroughfare for communications and a historical boundary line since ancient Roman times. A number of towns have grown up along their banks, such as Verona, Padua and Rovigo, important still today as economic and cultural centres.