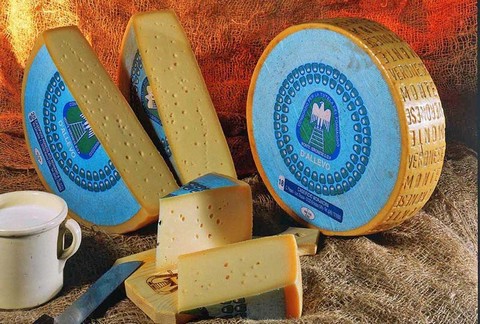 Typical of the cheese-making tradition in the mountains of the province of Verona and especially of the fertile pastures of Lessinia, this cheese appears to have originated in the Middle Ages. In fact, even before the year 1000 it was considered a precious commodity to be exchanged for coins. The word "Monte" may refer to a manufacturing technique that used curdled milk from more than one milking.

The production process was improved two centuries later after the arrival of the Cimbrian peoples from Bavaria, who settled in Lessinia, migrating from the Altopiano of Asiago. Monte Veronese only got its name at the beginning of the eighteenth century, making also reference to the area where it was made. Traditional cheese-making techniques have remained unchanged over the centuries, although they have advanced continuously, preserving their centuries of traditional characteristics. The region of production offers some insight into why this cheese spread so quickly: the favourable altitude, varied flora and excellent, naturally fertile meadows and pastures give the product its typical characteristics unique to the area.

This cheese is made with cow's milk and is available in whole milk and partially skimmed milk typologies, the latter called d'allevo.
The whole milk cheese has a semi-cooked paste and is produced only with full-cream cow's milk from one or two consecutive milkings. The paste looks white or a light straw yellow, with small, evenly distributed holes. The cheese is cylin-drical, with tops that are almost flat, and slightly convex sides; it weighs between 7 and 10 kg. The rind is thin and elastic, and has a shade of straw yellow. The taste is delicate and palatable, rather akin to cream and lactic ferments. Ripening takes from 25 to 60 days.

The d'allevo typology is available as a table cheese or a hard cheese for grating. Its paste is semi-cooked and it is made only of partially skimmed cow's milk from one or two consecutive milkings. Like the previous variety, it looks white or slightly straw yellow, but the holes are sparse and usually bigger than the whole-milk variety. Its weight ranges from 6 to 9 kg and the rind is always thin and elastic, and has a shade of straw yellow.

Depending on the period of aging, it may be mezzano, with a fragrant and bold taste - which requires a minimum of 90 days to ripen, although it may age for up to a year - or vecchio, ripened for at least a year, featuring a more distinct and sharper taste, tending to be almost spicy over time.

The area of Lessinia, the home of this cheese, extends over a broad plateau bordering the province of Vicenza in the East, the Val d'Adige in the West and the Valle di Ronchi in the North. In 1990, the Regional Natural Park of Lessinia was established to protect the inestimable natural heritage of its valleys and peaks.

The gentle inclination of its ridges (100 to 1.800 meters above sea level stretching 30 km), high rainfall in autumn and spring in upper Lessinia, deep trenches carved by torrential water, the karstic aridity of limestone and thousands of years of farmers' toil have shaped its diversity. Mediterranean olive trees and vineyards in the low hills become orchards (cherry and chestnut trees) in the mid-regions of Lessinia, turning to woods of beech and alpine meadowlands on the plateau. Sedimentary and volcanic rocks formed during the last 200 million years are the timeless features of this rare environmental mosaic, of which the Bolca fossil fishes are the most famous.

The history of Lessinia is not limited to its geological, prehistoric and ethnographic heritage. It boasts some traditional activities, such as mountain grazing and stone working - traditional stone roofs are still made at times - which continue to be the most important elements of the local culture and economy.