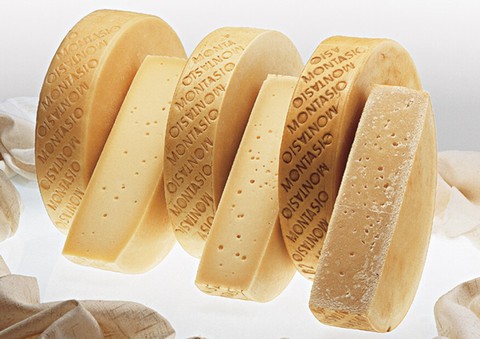 This cheese was being made as early as the thirteenth century by the monks of the Abbey of Moggio Udinese, and it takes its name from the plateau where the abbey was built: the Altopiano of Montasio.

Production techniques spread throughout the valleys of the Carnic and Julian Alps, to reach the plains of Veneto and Friuli. Its diffusion was also promoted by the abbey's proximity to the "Canale del Ferro", an important line of communication and trade route since the Roman times. Historical documents indicate that 5,000 sheep were being raised in malghe (alpine shepherds' cottages) in the Montasio area in 1259. Specific mention of this cheese dates back to 1773 when "Montasio vero" was included in a controlled price list imposed upon the Botteghieri (shopkeepers) by the Deputies of the town of Udine. Since then, the name has been a constant feature in the mercantile documents of North-Eastern Italy.

The typical production area extends through the eastern part of the Veneto region, the provinces of Belluno and Treviso, and part of the provinces of Padova and Venice, in addition to Friuli.
There are three different typologies of Montasio P.D.O.: fresco, with two months of ripening, mezzano, five to ten months, and stagionato, more than ten months. The texture is compact with few holes if the cheese is fresh, crumbly and straw yellow with small holes if aged. The fresh product has a delicate, slightly herbaceous and milky aroma that becomes richer and more aromatic with age. The taste is delicate and sweet when the cheese is fresh, palatable and spicy after aging, when the product is also ideal for grating; it can in short astonish at any given moment of its development.

Each wheel weighs between 6 and 8 kg, with an 8 cm edge and a 35 cm diameter; it has a smooth, even and elastic rind. Fat must account for at least 40% of dry matter.