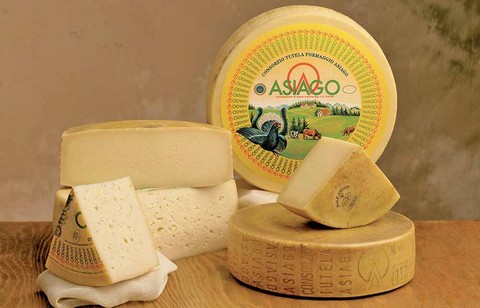 The Asiago P.D.O. cheese is one of the most famous Veneto Region products. It takes its name from the Altopiano (plateau) of Asiago, also known as the land of the "Sette Comuni" (Seven municipalities), in the province of Vicenza, between the Astico and Brenta rivers.

The local dairy tradition dates back a long way. It is thought that a flavorsome sheep's milk cheese was made in this area as far back as the Early Middle Ages, and the wool was used by artisan settlements in the area to the north of Vicenza, practices which continued until the recent industrial development. As meadows and pastures improved over the course of the past few centuries, cow's milk and cattle breeding have slowly replaced sheep breeding, giving rise to modern dairy farming practiced today in the alpine shepherds' cottages of the plateau. Today, milking and manufacturing of the cheese authorized to bear the Asiago P.D.O. designation take place throughout the provinces of Vicenza and Trento, and in a part of the Treviso and Padua provinces.

Asiago cheese - which in 1996 was awarded the Protected Designation of Origin, the main recognition for premium quality food products in Europe - is made in two ways: Asiago d'allevo (ripened typology) and Asiago pressato (fresh typology). They differ in type of processing as well as aging. The original Asiago, which is closer to the rigorous tradition of local cheese-makers, is without a doubt the d'allevo typology, which is cut only after several months of aging. Asiago d'allevo is made from cow's milk obtained from either two milkings (one of which skimmed) or only one partially skimmed milking.

The cheese-making process involves the bovine rennet being added to milk heated to a temperature of 35°C. It is then left to sit for about 20-30 minutes. The curd is cut, scalded at about 47°C, and dry salted or brined for several days before being transferred to the storage bays for aging. This is a table cheese that becomes mezzano after 4 to 6 months, vecchio after 10 months and stravecchio when aged for more than 15 months.

Asiago has small to medium holes, it is a straw-yellow colour, and can take on an amber hue on aging. It has a sweet taste and the mezzano cheese has a compact texture. The vecchio or stravecchio typologies have a stronger flavour, they are slightly spicy and have a harder, granular texture. Production of an Asiago typology with a shorter period of aging, known as pressato, began to appear in the 1920s, taking its name from the manual or hydraulic pressing process. Asiago pressato is made from cow's milk from one or two milkings; it is scalded to 44°C and partly salted as soon as it comes out of the cheese vat. Salting is completed after pressing. It is aged over a period of at least 20 days. Its paste is white or light straw yellow, it has uneven holes and a tendency to be somewhat sweet.

The Altopiano, home of the Asiago-making region, is also renowned for its unique landscape and culture. History has left indelible marks in the area. Many names of locations, mountains and woods bear witness to the ancient local population of Cimbrian peoples, who spoke a characteristic Germanic language, still known by some older people today.

The names of the "Sette Comuni " (although in reality there are eight) are Asiago (Sleghe), Roana (Robaan), Rotzo (Rotz), Gallio (Ghèl ), Enego (Ghenebe), Foza (Vüsche) and Lusiana (Lusaan). Conco (Kunken), the 8th municipality, was merely a district until 1796. World War I left trenches, fortifications, communication trench roads and pathways in this land that stood between the Kingdom of Italy and the Austro-Hungarian Empire. The environment and man have reclaimed the land scarred by The Great War, whilst preserving some of the marks it left behind as a reminder for future generations.