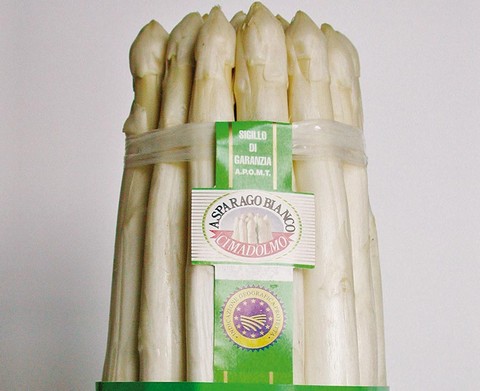 Asparagus was a delicacy as far back as ancient Egyptian, Greek and Roman times. Its name comes from the Latin word "asparagus", asparagio or sparagio in Italian. It is a perennial herbaceous plant, with wild and cultivar varieties grown in Central and Southern Europe. The young spears of the plant are eaten, usually boiled.

The Cimadolmo white asparagus P.G.I. is grown in the permeable and well drained, alluvial and sandy, loamy soils found on the left bank of the Piave river in the province of Treviso, an area that often flooded in the past. Asparagus from the gravel bed of the Piave river's floodplain is highly acclaimed and prized for its quality.

Giovan Battista Barpo, a clergyman author of a seventeenth century cook book, named asparagus as one of the foods no kitchen should be without, backing up his claim with a series of recipes that are still used today... «When a Father brings some asparagus and young pigeons to put on the table, he can live happily and contentedly all summer. Asparagus is a very good nourishment and its qualities are better than any other herbaceous plant; [...] It can be served as a salad, or cooked, with salt, oil and vinegar; it is good for soup, omitting the vinegar and adding pepper and some of its juices; or even with boiled fish, rolled in flour and fried, or grilled and laid out on paper with oil and spices; or perhaps raw, with salt and pepper».

The virtue of this product was also acknowledged in the regional competitions that became very popular at local trade fairs at the end of the nineteenth century. A humid-temperate climate, typical for this area, favours the quick growth of the asparagus, making the cultivation of tender, non-fibrous, white spears possible.

It is a spring vegetable, with harvesting beginning at the end of March and lasting 15 to 20 days the third year after planting, and two months or so after the fourth year. The asparagus is completely white with no green areas, even on the tops. According to the official guidelines that classify the indication, the product has to be whole, with no bruises or impurities, and free from undue humidity, foreign smells or tastes.

The Strada del prodotto tipico (Typical-product Road) itinerary runs through this predominantly agricultural area includes places of great historical interest, such as the town of Oderzo, whose origins date back to Roman times, the town of Cimadolmo and Grave di Papadopoli, an area teeming with reminders of the great final battle of the Piave offensive during World War I.