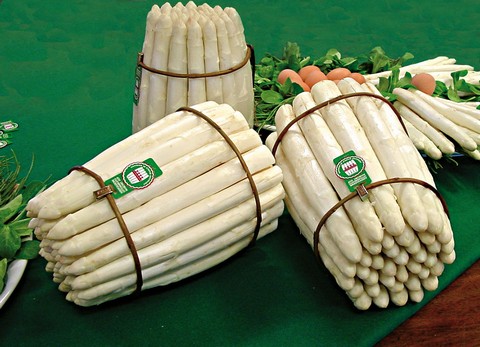 The town of Bassano del Grappa and a handful of other municipalities in the province of Vicenza make up the production area of the latest product in Veneto Region to be awarded the P.D.O. designation. The area along the Brenta river offers ideal conditions for asparagus growing, with sandy, light, well-drained and slightly calcareous soil and a particularly mild climate. These soil and climate conditions lend themselves to a product whose sweetish aroma blends with a hint of bitterness, a balance of flavours highly appreciated among consumers.
Local use of asparagus dates back centuries. Legend has it that Saint Anthony of Padua first introduced the vegetable to the region when he visited the area to appease the tyrant Ezzelino da Romano. It is also linked to the Saint with its traditional harvesting season ending on 13 June, the anniversary of his death in Padua in 1231.
Early documents mentioning asparagus crops in the area date back to the Venetian Republic. When in season, the delicacy was a permanent fixture at the lavish banquets held by the nobility, and trade flourished. Other documents claim that the Council Fathers were offered Bassano asparagus on their way back from the Council of Trent, and that they were delighted with it.

Only the local ecotype of asparagus spears, the variety named Comune - or Chiaro - of Bassano, may bear the P.D.O. designation. They are pinkish-white, well-shaped, straight and whole, with firmly closed crowns. They must not be hollow, broken, split or peeling. The fibre content must be low to ensure exquisite tenderness; woody stems are not accepted. Besides its bitter-sweet taste, its palatable texture is the most precious quality of the Bassano asparagus, a characteristic best appreciated when just picked. A trip to savour the asparagus at its source can be combined with one of the many cultural, historical and wineand-food events offered throughout the growing region and, in particular, in the town of Bassano. Located in the pre-alpine hills of Vicenza, not too far from the Grappa massif, the small town is especially well-known for the famous Ponte degli Alpini (Alpine bridge), the subject of a popular Italian song; the striking bridge spanning the Brenta river was designed by the architect Andrea Palladio and has been destroyed and rebuilt many times. The historical town centre dates from the Middle Ages, and radiates from three squares. The town is dotted with numerous religious and public buildings reflecting the influence of Venetian style.

Besides asparagus, Bassano is also famous for grappa and ceramics. A ceramics museum is located in the charming setting of Palazzo Sturm, now also home to the Remondini Museum, one of the few museums in Italy dedicated to printing and certainly the most broad-ranging. Its six rooms house a permanent exhibition that narrates the industrial achievements of the Remondini family in the eighteenth and nineteenth century, through a collection of books, decorated papers, sacred and secular popular etchings, paper cut-outs, toy soldiers, games, perspective views, etchings and xylographical works by great Italian and European engravers, such as Mantegna, Dürer and Tiepolo.