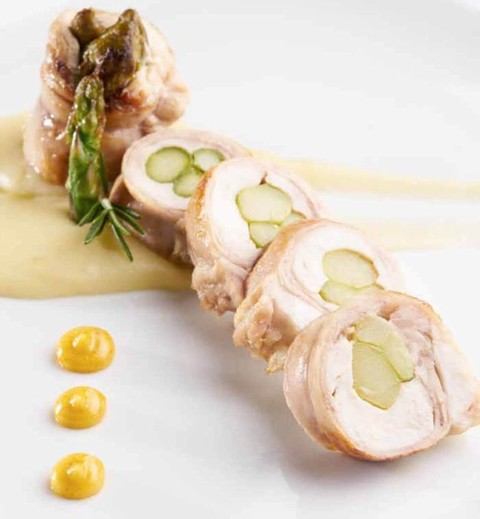 Ingredients for 4 people:
300 g of boneless rabbit fillet
Salt and oil to taste
200 g of white Badoere asparagus PGI
200 g of green Badoere asparagus PGI
300 g of potatoes
Remove the white parts of the rabbit meat well (bitter fat during cooking); flatten and season with salt and oil, then arrange the steamed asparagus on top. Close the fillet by rolling it up, then tie it with a string; pass the roll on the pan to sear the meat. Cool in a blast chiller, then put in a cooking bag and steam in the oven at 85 ° for 40 minutes. Cook the peeled potatoes in a saucepan with onion, salt and oil, until they flake. Blend with the mixer to form a cream, then spread it on the plate. Remove the rabbit from the bag, remove the string, cut the stuffed meat into slices and place them in the potato cream.
Photo and recipe © Editoriale Programma s.r.l.