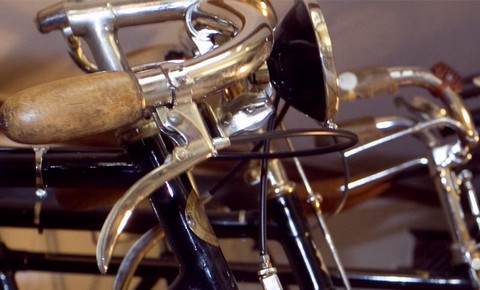 The fascinating Historical Bicycle Musem is located in Cesiomaggiore, in the province of Belluno,

It was Sergio Sanvido - former cyclist and great bicycle enthusiast - who, in the 1990's, began travelling the world and collecting unique items, creating, on 29 June 1997, a first private collection (named after the Venetian, Toni Bevilacqua, world champion of pursuit racing in 1950 and 1951) that he later donated to the Municipality of Cesiomaggiore.

The museum is part of the Club Italia Musei Ciclismo (Italian Cycling Museum Club) and is considered one of the most exhaustive collections in Italy. There are 170 bikes on display, each with its own story to tell: from a child's bicycle to a bicycle for work, from war bikes to competition bikes.

The oldest model is a celerifere from 1791, while among the more modern examples are legendary bikes belonging to Coppi and Bartali, Moser, Saronni and Pantani. And then there are lots of items, such as bike lamps with candles, ventilated saddles, mudguards with brushes, memorabilia,accessories, photos, shirts, old cycling magazines, and, soon to arrive, a small, historical artisan workshop.

For those who are interested, you can book guided tours and meet the creator and current director of the museum, Sergio Sanvido, who will accompany you on an extraordinary voyage into the world on two wheels.