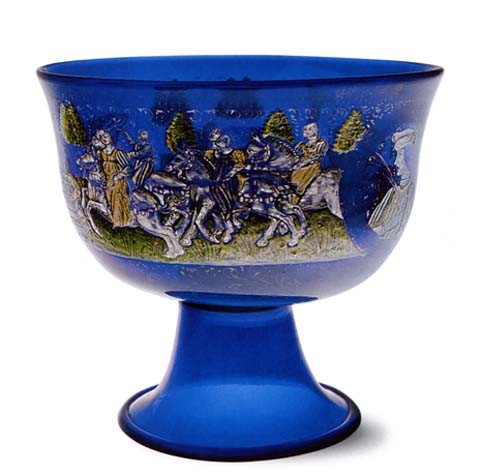 Opened in 1861, the Glass Museum, housed in the ancient Palazzo Giustinian, invites visitors to take a walk through the history of Murano glass from its very origins to the 1900s. The collections are displayed in chronological order and range from Roman artefacts in the Archaeological Collection to items created between the 15th and 20th centuries, with masterpieces of universal importance demonstrating the deep-rooted bond which links the Venetian island to glass working.

Among the traditional glass of the 16th century, when Murano products were beginning to permeate the whole of Europe, we wish to draw your attention to lattimo - an opaque white glass similar to porcelain - and 'ice' glass, with its crackle-finished outer surface.

Murano glass entered a new phase in the 18th century with Giuseppe Briati; the museum preserves many pieces of his work, including multi-armed chiocche design crystal chandeliers, deseri table centrepieces and mirrors.

From the latter half of the 1800s, blown glass by Antonio Salviati and Vincenzo Moretti’sreproduction of Roman mosaic glass gave fresh impetus to the glass-working industry. Among the most important pieces are works in enamelled glass, such as the Coppa Barovier goblet, which stand out as the finest example on display at the museum.

At the beginning of the 1900s, the traditional crafting techniques were used in more modern creations such as those in mosaic glass by Vittorio Zecchin. The artists began teaming up with the glass furnaces on the island for their projects. That is how Umberto Bellotto’s combination of glass and wrought iron came about, just like the fantastic glassy fabrics created by Carlo Scarpa for Venini.

In the period following World War II, Murano focused on the colour effects of glass, which can be admired in the works of Ercole Barovier and Giulio Radi, in Alfredo Barbini’s sculptures and in Archimede Seguso’s filigree glass creations. The link between world-famous designers and Murano glass furnaces was becoming stronger and stronger, crowning the island as the world champion of glass.