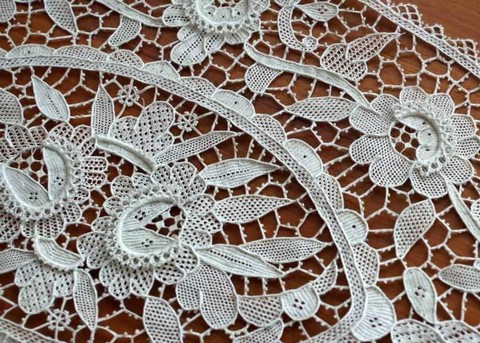 Burano honours artistic handiwork dating back centuries. The Lace Museum has been located since 1981 in the rooms of the historical Lace School established in 1872 by the Countess Andriana Marcello. More than two hundred exquisite works of art from the 16th to the 20thcentury bear witness to the historical and artistic story of lacework from Venice and the lagoon.

With its roots in Renaissance Venice, the art of lacework was developed mainly by noblewomen before reaching out to other social groups, engaging monasteries, schools and hospices. If elsewhere lace was processed with bobbins, in Burano the whole process was performed using a needle and without a support fabric, quickly achieving stylistic and multicolour effects in keeping with the fashion of the times.

The tour begins with a video subtitled in English, which delves straight into the fascinating world of laceworkers, with captioned panels narrating the secrets of the trade. The exhibition is in chronological order and spans four rooms, each one corresponding to one of the four different themes, narrating the development of the art of lacework in Venice from the 1500s through to the 1900s.

The 17th century was the century par excellence for lace, with the emergence of the Venetian point and the exquisite Rose point. The adornments are distinguished by a myriad of realistic-looking botanical peculiarities arranged in spirals. The years between 1650 and 1675 were taken over by Indian flowers, imaginatively portrayed.

In the 1700s, Venetian needlework led to the creation of the Burano point, which can be observed in spectacular lacework as well as documents with important patterns, photographs and iconographic testimonies. In this area, as part of the Musei Civici di Venezia, you can actually watch master lace workers at work before your very eyes; in the morning, they put into practice the processing techniques that have been handed down from generation to generation.