I2 - The Veneto Ring

Leaving from Venice, the bicycle path of the Venetian lagoon islands crosses the islands to reach Chioggia (province of Venice).

After visiting the historical centre of the town, you can continue cycling along the bank of the Bacchiglione River; passing through the Benedictine Courts of Correzzola (province of Padua) you arrive at the oldest thermal spa in Europe, the Euganee Thermal baths (Padua).

From here the centre of Padua can be reached in no time at all. Still following the Bacchiglione River, in a landscape dotted with villas, you reach Vicenza and its historical centre, which is classified as a World Heritage Site. After a break in the city, the path leads to the foothills towards Marostica and Bassano del Grappa (province of Vicenza), the former famous for chess and the latter for Palladio's Bridge of the Alpines.

Among the rolling hills, the path finally reaches Asolo (province of Treviso), one of the "most beautiful villages in Italy". Passing through Montebelluna (province of Treviso), the Montello nature is nearby, with Treviso and its historical centre just a bit further away. From the capital of the Red Radish, the path again returns to the lagoon by means of the GiraSile bicycle path, along the banks of the river of the same name.

The route is varied and easy, even though it has short stretches on busy roads. On the banks of the rivers we ride on unpaved cycle paths. There are no significant climbs. Crossing the Venice lagoon by boat is a memorable experience, as well as discovering the small rural villages and the pools of Terme Euganee.

Stage 2.1 Venezia-Chioggia - "The Cycle Path of the Islands" 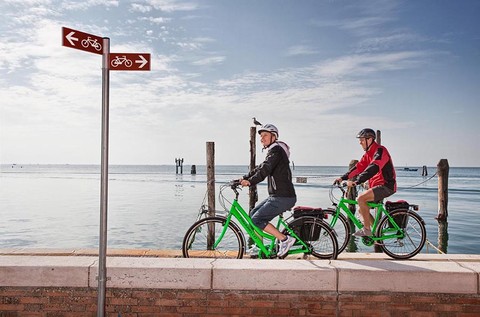 The first stage of the itinerary to discover the landscapes of Veneto sets off from Venice. And there is no better place to start: the city of the doges ruled the hinterland for about four centuries leaving an indelible impression on the culture of the inhabitants.

After visiting the historic centre of the lagoon, strictly on foot, we reach the ACTV (Venice public transport) boarding point in Tronchetto to embark the ferry boat directly to Lido di Venezia. Having alighted in the vicinity of the church of S. Nicolò we start pedalling toward the northern end of the island following the signs to E5, the path is the same as the excursion "Cycle Path of the Islands of Venice".

The excursion first continues along the Riviera facing the lagoon, then crosses the Viale Santa Maria Elisabetta, from which the main urban axes of the town branch off. We will shortly reach the Marconi seafront, overlooked by the palaces of the most prestigious tourist centre: the Grand Hotel des Bains, the casino, the palace of the Mostra del Cinema and the unique Moorish palace of the Grand Hotel Excelsior. Having passed through the centre we climb the pedestrian and cycle path formed adjacent to the Murazzi, a system of barriers placed to defend the island from sea storms.

Having left the small centre behind us we reach the naturalistic oasis of Alberoni, where we take the ferry to the island of Pellestrina. Having alighted at Santa Maria del Mare we continue toward the port of S. Pietro in Volta with the eighteenth century church surrounded by low fishermen houses and gardens. Riding southwards we first come across the village of Portosecco, where we can still encounter women making lace, and then the picturesque centre of Pellestrina with homes from the XVI and XVII centuries. The toughest riders can push themselves to the southern end of the island, following an unprotected lagoon-front path, where we can see the ancient fort and the naturalistic oasis of Ca' Roman. From Pellestrina the ferry sails to Chioggia, situated only a few kilometres away.

Stage 2.2 Chioggia-Abano and Montegrotto - "The path of the salt and sugar" 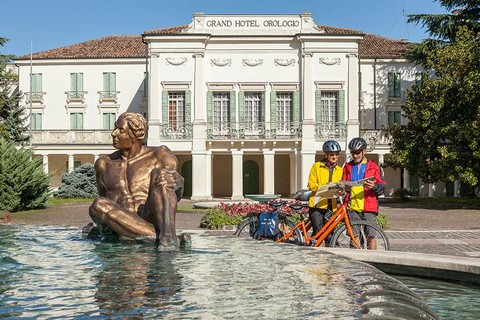 The Cathedral of Santa Maria Assunta, the ancient church of Sant'Andrea and the medieval tower are the main monuments of the picturesque historic centre of Chioggia nestled between streets and canals. Do not miss the colourful fish market, between the square and the Canale della Vena canal.

With this stage we retrace the salt road that led to the Venetian cities from the lagoon. In Correzzola we encounter a sixteenth-century construction of great architectural merit: the Benedictine Court. In this territory the monks accomplished great reclamation works and built numerous rural courts, still inhabited today, in support of agriculture and livestock farming.

The next stage is Pontelongo, a town developed after the construction of a large factory in 1910 which is still active. We continue along the embankment of the canal and pass through the centre, once fortified, of Bovolenta, where the waters coming from Padua to the right and the Euganean hills to the left converge.

The journey continues in the direction of these hills that appear on the horizon with the characteristic volcanic profiles. The numerous Venetian villas, the coastal village of Pontemanco, the bridges in masonry and the former Abbey of Santo Stefano are all elements that we meet along the path and which bear witness to the ancient origin of this water way, today transformed into a cycle path.

The route ends in Battaglia Terme, a characteristic village of the Euganean hills where an original museum preserves the memory of the inland waterways. The renowned spas of Abano and Montegrotto Terme are less than ten kilometres away.

Stage 2.3 Abano and Montegrotto-Vicenza - "Among the Euganean and Berici Hills" 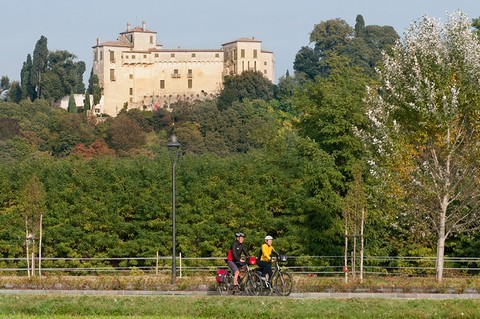 The spas of Abano and Montegrotto are the ideal stopover to recover our energy after the first two stages of the journey through the lands of Venice. From the spas, Padua can be reached in half an hour along a pleasant cycle path formed on the embankment of the Canale Battaglia canal. The latter is one of the oldest waterways in Italy and has the peculiarity of having been built over the countryside. Also in this case there is no lack of Venetian villas, such as the magnificent Villa Molin, work of the architect Scamozzi.

Near the Bassanello, where the waters of the Bacchiglione are divided into three distinct channels, we follow the one that leads to the city. Padua is a city of faith, science and art. This fame is due to the figures of the great personalities of the past: Santo Antonio whose mortal remains, venerated by millions of believers, are conserved within the Franciscan Basilica, Galileo Galilei astrophysicist and professor of the ancient university, and Giotto the greatest artists who frescoed Paduan churches and palaces astride the thirteenth and fourteenth centuries. Do not miss the Scrovegni Chapel.

After visiting the historic centre we turn back to follow the waters of the Bacchiglione. The forty kilometres that separate Padua from Vicenza are a pleasant embankment path because it offers the possibility to enjoy broad panoramas moved by the presence of the Euganean Hills first and then the Berici Hills.

Having reached Longare we suggest a deviation toward the town of Costozza, embellished by considerable Venetian villas. A comfortable cycle path leads tourists safely to Vicenza whose arrival is anticipated by the tall bell tower of the sanctuary of Monte Berico and two works of Andrea Palladio: Villa Capra Valmarana "La Rotonda" and the nearby Arco delle Scalette. 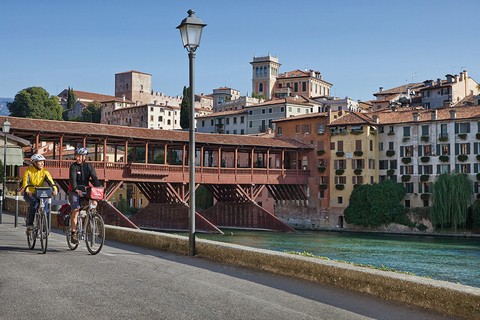 A path rich in landscape and artistic impressions winds between Vicenza and Bassano del Grappa. At the foot of the Asiago Plateau cyclists can ride to discover a territory that hides waters underground, which emerge in the area of Dueville giving life to the springs.

Continuing on our journey toward Bassano del Grappa we encounter Sandrigo, around which we once more find evidence of the ancient agricultural tradition with many rural buildings that characterise the surrounding countryside in addition, of course, to stunning villas.

The town is also known because it keeps the tradition of preparing the famous baccalà alla vicentina alive, a typical dish featuring salted cod that is celebrated on the feast dedicated to it every year in September. Having left Sandrigo, behold Marostica, which welcomes visitors with its walls and its castles. Famous throughout the world for the chess game that is held in the beautiful Piazza degli Scacchi every two years, Marostica is also known for its typical products. We remember the cherries, to which a show is dedicated every year.

The stage ends in Bassano del Grappa, an important city in the province of Vicenza that surprises and enchants those who discover it with its architectural features and landscapes. The city, located along the Brenta river and at the foot of Monte Grappa, is famous for the wooden bridge designed by Palladio and that became the symbol of the Alpini.

A glass of grappa at the end of the day is the just reward for the fourth stage of this journey through Veneto.

Stage 2.5 Bassano del Grappa-Treviso - "At the feet of the Asolani hills" 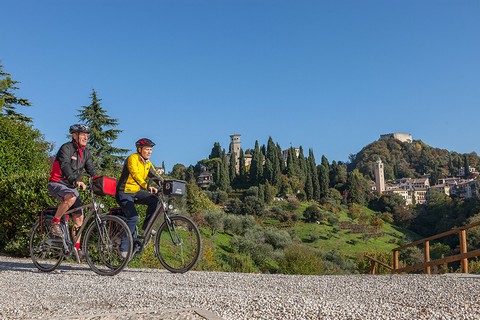 The bulk of Monte Grappa marks the beginning of the path to enter Marca Trevigiana. High ground, hills, small valleys and plateaus alternate, generating ever unseen landscapes. On a hill stands solitary a tower, symbol of San Zenone degli Ezzelini; this is what remains of one of the castles of the powerful Ezzelini family.

Entering the heart of Marca, we see the romantic and elegant Asolo, "the city of a hundred horizons", which stands out with the imposing form of its fortress over a lush green landscape of olive and cypress trees. A short distance away we find Maser, a village known for the homonymous Palladian villa, a gem of sixteenth century architecture and for its cherries whose blossoms whiten the hills in April. Having arrived in Montebelluna, a modern and industrious city, the Museum of Natural History and Archaeology and the Museum of Boots, housed in the sixteenth century villa Binetti-Zuccareda, deserve a visit.

From Montebelluna just a few pedal strokes to leave the city vibe and immerse yourself in a natural environment rich in history: behold Montello.

This hill lying on the plain of Treviso is an ideal destination for pleasant excursions enlivened by stops at tourism farmhouses. The last stretch of road crosses the territory of Marca in areas where history mingles with modernity; secondary routes lead to Treviso whose historic centre is enclosed within the original Renaissance walls.

Stage 2.6 Treviso-Venezia - "From the Sile to the Lagoon" 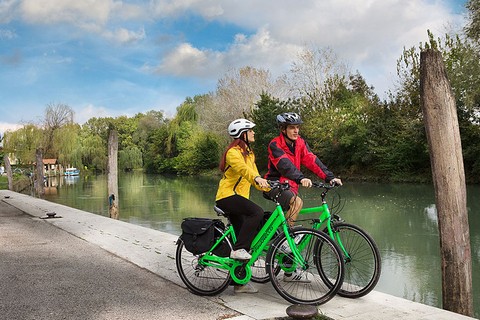 The last stop on the itinerary sets off from Treviso, a enchanting city to discover its stunning corners: channels to walk along admiring the façades of the frescoed houses, lanes and squares, especially Piazza dei Signori with the Palazzo dei Trecento.

Following the course of the Sile river, the longest spring river in Europe, the path leads us on to the pleasant descent toward the Venice lagoon. Centres of interest unfold along its shores such as Casier, the centre of commercial interchange between the countryside and the lagoon since the distant past, where we can listen to the chiming of an original water clock (hydrochronometer); then we encounter Casale sul Sile, a strategic point for the control of river traffic as evidenced by the medieval tower commissioned in the fourteenth century by the noble Carraresi.

We are in the homeland of the red Treviso radicchio, called "spadone", cultivated in  Dosson with whitening techniques, known since the second half of the nineteenth century. These places offer not only the prized radicchio: the Strada dei vini del Piave invites tourists to visit the scenery of vineyards and the luxuriant estates that belonged to the Venetian Republic.

Having reached Quarto d Altino, the sea breeze brings the perfumes of the lagoon and some tourist signs indicate the passage of the ancient Via Annia road. A short distance from the modern town centre stands the archaeological area of a port city built by the Romans. With barbaric destruction the town was demolished and the inhabitants took refuge in the lagoon, thereby helping to establish Venice.

The lagoon city is a fascinating destination of this ring-route through the ancient domains of the Serenissima Republic.