The City of Vicenza and the Palladian Villas

Two UNESCO awards linked to the Palladian genius: the city and the villas 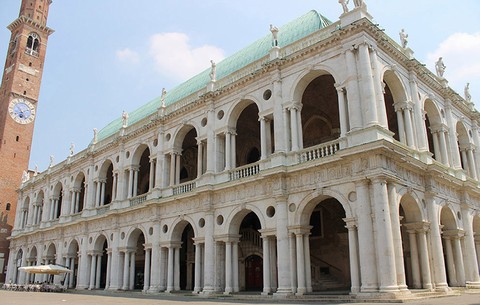 Inscribed a World Heritage Site by UNESCO in 1994, Vicenza’s majestic architecture that gives the city its unique appearance is the work of only one man: Andrea Palladio. The architectural genius of this Renaissance Master is most evident in his buildings whose distinct architectural elegance, balance and harmony is unique, and were able to change the urban layout of the city and a part of the landscape.

One need think only of the magnificence of the Palladian Basilica, the Olympic Theatre, the Loggia del Capitaniato and the extraordinary Villa Almerico Capra “La Rotonda”.

The Site “City of Vicenza and the Palladian Villas of the Veneto" is a serial site with two inscriptions by UNESCO. Inscribed on the World Heritage List in 1994, the site initially comprised only the city of Vicenza with its 23 buildings and 3 suburban villas attributed to Palladio; 21 villas located in several Veneto provinces were later included in the 1996 site extension.

Vicenza and The Villas