The City of Verona 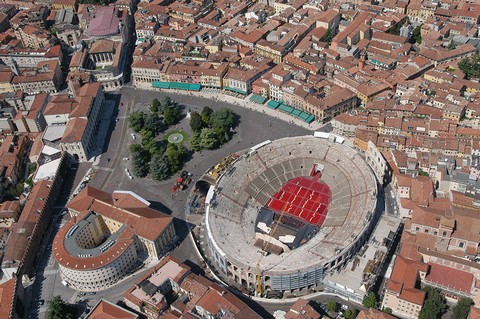 In his Travels in Italy, the great German poet Johann Wolfgang Goethe was surprised by Verona and in particular by its life in the city: "It is beautiful during the evening and so the aristocracy goes out for a walk. Some of them go to church to recite the Hail Mary, some stop in Piazza dei Cavalieri to approach the coaches and spend time with beautiful women".

That was written in 1786, but the charm of the historical center of Verona is still alive today and has earned the city the coveted award of a UNESCO World Heritage.

Together with Rome, Verona can be considered the second city in Italy for the presence of well preserved Roman remains. The amphitheatre is the extraordinary scenic backdrop of Piazza Bra, the Roman theatre, the Stone Bridge, the Gavi Arch, the doors of the Lions and Borsari are some of the most important unexpected treasures to be found in this city. They are ready to tell their story to the visitors as soon as they cross the city wall.

Verona also has remarkable sign of new political and economic development discovered after the year one thousand, when the city became one of the most important centres of northern Italy, first as a free and prosperous Municipality and then as a powerful lordship of the Scaliger family.

Some examples of the most striking architecture are the Church of San Zeno, a Romanesque style masterpiece, or Castelvecchio, the manor built in the middle of the fourteenth century on the banks of the Adige.