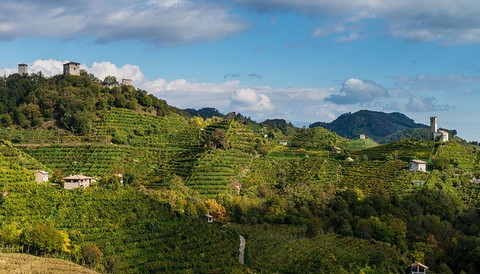 With the recognition of the Prosecco Hills of Conegliano and Valdobbiadene, the number of Veneto sites on the UNESCO World Heritage List rises to 8.

In the official description we read that "the area includes a series of hilly chains, which run from east to west, and that follow one after the other from the plains to the Pre-Alps, equidistant from the Dolomites and the Adriatic, which has a positive effect on the climate and the countryside. If Conegliano is home to many wine-related institutes, Valdobbiadene is instead the productive heart of the wine area. The steeply sloping hills make it difficult to mechanize the work and consequently vineyard management has always been in the hands of small producers. It is thanks to this great, peaceful army of workers and thanks to the love for their land that it has been possible to preserve these beautiful hills and create a strong bond between man and the countryside. The result of this strong bond is an extraordinary example of how this ancient culture is strongly rooted in its land ".

Go to the site