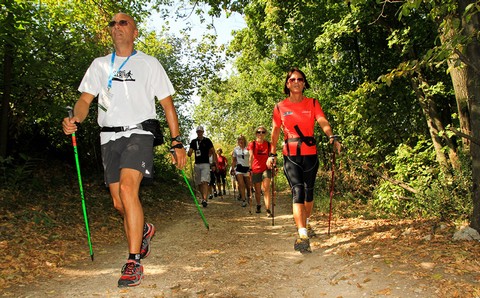 It is fun, wholesome and inexpensive and can be practised by everyone at any age, alone or in company, and in any season of the year. Nordic Walking was born in the Scandinavian countries a few years ago to train cross-country skiers. It was later developed as a fitness activity and has now established itself all over the world.

Considered as a perfect example of physical activity, it consists of walking with alternating arms and legs, pushing on special sticks, with a simple technique that you can learn from qualified instructors.

The use of sticks improves coordination, relieves the pressure on lower limbs and also involves the upper limbs, involving many more muscles than a traditional walk. At the same speed and distance travelled, it therefore requires greater energy expenditure, thus improving physical fitness.

On the beach, on a mountain or hill path, in a park or by the lake: in Veneto there are numerous specifically designed routes for practising this activity in charming locations.