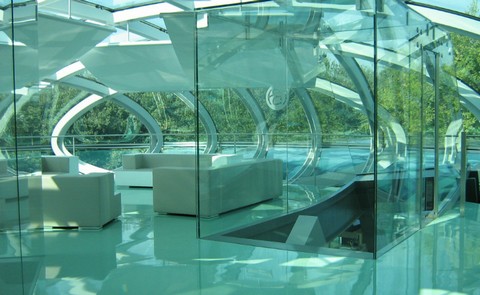 Architecture has the power to shape space, to make us feel at home in modern situations and respond to our need for "aesthetic values", even in daily life.

Aware of the vital role played by the works of talented architects for social and cultural gain, the Veneto Region has chosen four recently built examples of such works that are by no means exhaustive of such a broad domain, but nonetheless represent the potentialities of contemporary architecture.

The first project is the FABRICA Communication Center, built for the Benetton Group by Tadao Ando the architect-carpenter-boxer in Catene di Villorba (TV).
This new architecture blends with the existing seventeenth-century villa, creating an original work which tips the wink at classical Roman architecture. It creates an atmosphere where time seems to no longer exist.

Fabrica's ascetic severity gives way to the power of the "Black Cube", an automated warehouse and logistics center owned by Dainese in Vicenza, which clearly makes references in its colors, shapes and function to details of the product they make: biker suits.

Even greater visual impact is produced by the project of Massimiliano Fuksas Nardini in Bassano del Grappa. The intent of the architect was to contrast the glassy of the laboratory bubbles suspended over the reflecting pool with the heavy corporeality of the hypogeal auditorium.

And finally the project to commemorate the victims of September 11: Daniel Libeskind created a sort of history book transfixed by one of the steel beams that burned and collapsed during the tragedy in living memory and a reminder for future generations.